How to Use "Playtime" as a Reward in Dog Training

How to Use "Playtime" as a Reward in Dog Training

Many people understand the advantages of using food as a reward in training dogs, but play is also a very powerful reward. 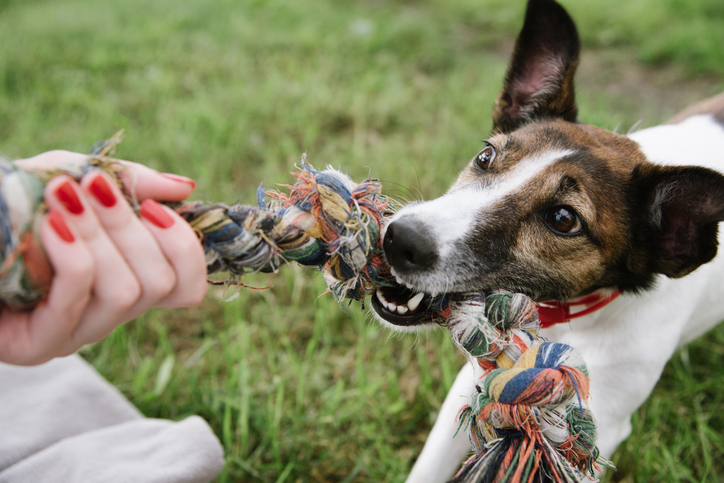 Studies have found that, for dogs, social interactions with familiar humans are highly rewarding and that dogs whose owners play with them have been found to score higher in obedience tests than those whose owners do not play with them (Bradshaw, Pullen, & Rooney, 2015).

To get the most out of play, keep everything positive.

The benefits of play are reduced if the dog receives a verbal correction from the owner and dogs who have been trained with punishment-based methods are much less interactive during play than dogs who are trained with rewards (Bradshaw, Pullen, & Rooney, 2015).
Initiating play with many dogs is easy. Studies on play between dogs and humans showed that when humans run toward or away from a dog, the human was effective at initiating play with their dog but when humans tapped the floor in a common method of attempting to initiate play, the dogs showed a much lower rate of responding playfully to the human behavior (Rooney, Bradshaw, & Robinson, 2001).
A good game to play with a dog is tug toy. For many years this was not recommended but is actually a great game to teach rules of play, to build confidence in the dog, to reduce anxiety and as a great reward for other less engaging exercises. Teaching “tug-of-war” correctly is important and consists of several steps.
Tug toy should be taught and played with rules in place, much like human games are. The rules should be trained and include that the dog must relinquish the item when asked; that there is a special tug toy for this game and that the game is initiated on cue (and the dog must not grab before the cue to start is given; the game should be interrupted by other exercises like obedience and a game restart as the reward; and that the dog can never place his teeth on human skin. (San Francisco SPCA, 2016).
Dr. Ian Dunbar notes that if the dog bends a single rule, the owner simply says "Finish" and walks off. The dog learns that any rule-bend always abruptly terminates an otherwise fun game. He further notes that tug-of-war is a great way to practice keeping control over your dog when they are excited. It also can teach dogs to relinquish items willingly, knowing they will get them back and can reduce the chance of developing resource guarding. (Dunbar)
The other benefit to playing games with your dog is that studies have shown a correlation between lowered rates of separation-related behavior such as vocalizing in the absence of the owner or staying by the door the owner left by and playing games with physical contact between dogs and owners and playing games with physical contact between dogs and owners (Rooney & Bradshaw, 2003).

Play is rewarding because it is fun for the participants.

In studies of rats, neurobiologist JaakPanksepp discovered that an increase in opiates facilitates playfulness and opiates may enhance the pleasure and rewards associated with playing. Play is a cooperative pastime and MRIs (magnetic resonance imaging) on humans show that the brain’s pleasure centers are activated when people cooperate with one another (Bekoff, 2007). Studies at Colorado State University revealed that oxytocin levels in women increased by 58 percent when women played with their dog (Hare & Woods, 2013). Oxytocin is an important hormone for women promoting mother-child bonding amongst other functions and has been referred to as the “cuddle” hormone.

Jane Bowers has been training dogs for over two decades. She teaches people to train their dogs in group and private training courses and has a keen interest in assisting dogs with behavioral issues. Her company is Dogs of Distinction Canine Training Inc. Jane has a monthly newspaper column on dog related topics and is a former host of a live call in TV show on animals. She is a strong advocate for force free and humane training methods for all animals. Jane has a degree in psychology and is certified as a dog trainer through the Certification Council of Professional Pet Dog Trainers and as a behaviour consultant through the International Association of Behavior Consultants and through the Association of Animal Behavior Professionals.
These organizations require a minimum number of continuing education units be obtained to retain certification. She is also a professional member of "The Pet Professional Guild," an organization committed to force-free training of animals and the "Association of Professional Dog Trainers," a professional organization of individual trainers who are committed to being better trainers through education. Jane is the content creator of the online course "Assessing and Interpreting Dog Behaviour," which is a course for law enforcement personnel who meet unfamiliar dogs in the course of their duties. She is the author of "Perfect Puppy Parenting," a guide to raising a happy, confident, well-behaved dog. Jane spent 17 years working for Customs Border Services and in joint teams with US Homeland Security and the RCMP. She spent a further 8 years working as an Animal Control Officer and Bylaw Enforcement Officer. Jane lives on a small farm with dogs, sheep, donkeys, and chickens. The dogs each came from situations that prevented them from living in their original homes. The dogs range in size and age and with the dog training and behavioral work, whether it's participating in the development of an online training course, working with a client's dog or tracking a lost pet or animal.
:|zpendofcontent|: