Why Do Dogs Sneeze?

Why Do Dogs Sneeze?

When dogs sneeze, humans almost always laugh. There's plenty of YouTube evidence of this! It seems to hit our funny bone in just the right way. 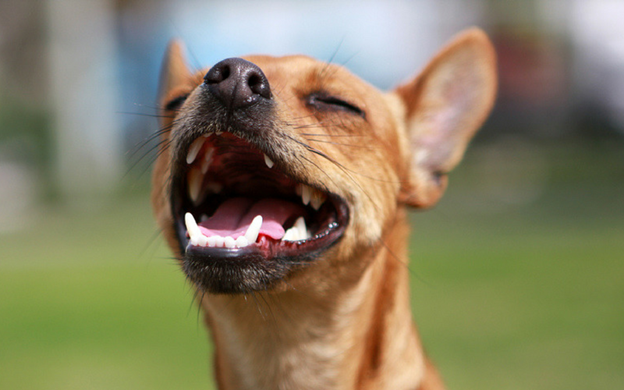 It's tempting to think our canine friends are just natural born comedians who love to make us laugh. While there may be a sliver of truth to that, the role of sneezing in dogs is rather complex.
Let's take a look.

In the vernacular, any abrupt and forceful exhalation of air through the nose is called a "sneeze."Technically speaking, however, a "sneeze" is defined as an INVOLUNTARY act, i.e. it's uncontrollable.
In plain English, a sneeze comes whether you want it to or not! The mucus lining of the nasal passageways get contaminated with foreign invaders and the body automatically jumps into action to expel them!
A snort looks almost identical to a real sneeze but it differs in one very important aspect. It's a VOLUNTARY act, i.e. it's done intentionally! Unless your dog has allergies or is sick, most dog "sneezes" are actually snorts.
You can tell the difference by noticing if the sneeze comes from deep down or not. The air of true sneezes comes from deep down in the lungs but the air for snorts are more shallow, although your pooch may be putting on quite the animation when it happens.
It's common for people, sometimes even scientists, to use the word "sneeze" when they actually mean "snort."

When dogs interact, they speak to each other with signals, i.e. social cues. From a survival perspective, one of the most important signals for a canine to give is the "I want to be friendly, not aggressive" signal!
Snorting at each other is one of these universal canine cues they send each other, and by extensive, to their human family and friends!
For dogs, snorting is analogous to one human smiling and giving a friendly "hello!" to another human. Just head down to the dog park one day and watch the snort signals back and forth.

Why Do Dogs Sneeze More When Laying On Their Backs?

You may have noticed that your dog sneezes more when laying on her back, especially when outside. In some cases, this is because she's in a position where dust, pollen, and other airborne particles can more easily fall into her nostrils!
If this is the case, she's letting out a genuine sneeze, not a snort. However, it may also be a snort if she is laying on her back to show she trusts you and just wants to play. "Sneezing" (snorting) is her special signal to say, "I'm playing, not fighting!"
It's an added signal to the fact she's laying there exposing her tender belly to you! So, it's okay if you laugh.

Try Pretend Sneezing With Your Dog

If you want to have some fun, and prove your dog is just snorting (play sneezing voluntarily), try to pretend sneezing in the presence of your dog and see if she'll copy you and start sneezing back.
Like yawning, play sneezing (snorting) can be contagious. This will work best if you grab a toy and start playing while you play sneeze at your dog. Just make sure your neighbors aren't watching because they may think you're loony tune! 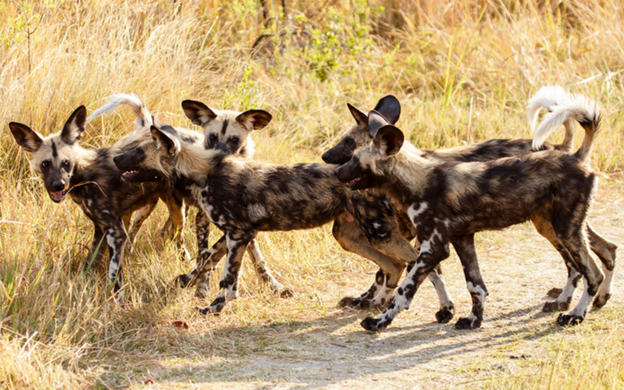 It's always fun to see our domesticated pooches give us a glimpse into their wild past when they were free roaming wolf-like canines. African Wild Dogs are endangered species living wild in Botswana.
In an effort to save this species, researchers with the Botswana Predator Conservation Trust, have been studying their behavior in the wild. Through their observations, they have noticed that African Wild Dogs use sneezes to cast their individual "vote" on whether or not the pack should go out hunting. Of course, this is a much-needed activity but it is also dangerous and energy consuming.
In these free-ranging African Wild Dog packs, they have a rather democratic process. Each member of the group gets a vote but the leader of the pack has their vote count more.
So, if the leader is present, and he sneezes to indicate he wants the pack to hunt, it only takes a few more affirmative votes (sneezes) for the whole pack to follow.
On the other hand, even the pack leader can be overruled if no one else sneezes! Further, if the leader isn't there, scientists estimated it takes about ten votes (sneezes) for the whole pack to go on the hunt!

In canines, sneezing is more than just body language. It can indicate a precise social signal that is very important to the individual and to the entire pack. Now go practice your pretend sneezing in the mirror so you can try it out on your favorite pouch and see if she snorts right back!!
Good luck to you and pooch! 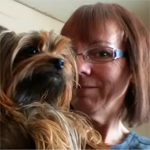 Sheri is the owner and founder of trainthatpooch.com, a blog inspired by her girl Bella, a five pound Yorkshire terrier with “attitude”. She was ready to have the perfect Yorkie… And she did… for about a minute. That’s when she realized that she had to train her if she wanted to have a well-behaved companion. Long story short, through many mess-ups and not knowing what she was doing, she was able to figure out a few things. Reading, researching and studying about dog training online helped her to better understand Bella and what she was going through, and she learned even more. As she talked to other dog owners at dog parks, out and about and at dog-related forums, she realized one thing – More people could benefit from what she was learning through trial and error. That was the moment that Train That Pooch was born. The only thing that outweighs her love for all things dog related is here love for Bella. She knows how much you love your pooch and wants you to have the same kinds of fun experiences and memories that Bella and she have had thus far.
:|zpendofcontent|: